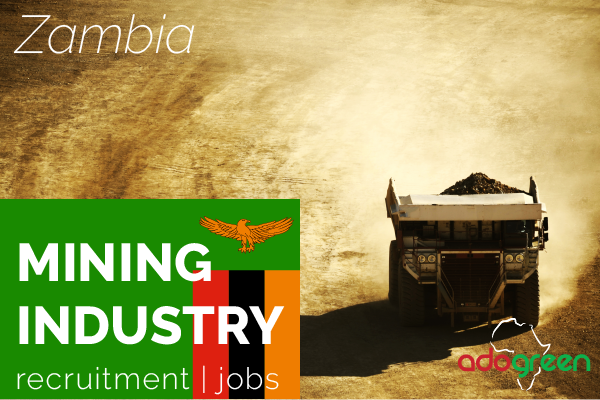 Whether you are looking for market and salary information or up to running a recruitment drive for a large scale projects we have the expertise and tools to assist you.

Go To Job Board

AdoGreen is a specialist recruitment agency focusing on finding local talent in the mining industry. Zambia has a high demand on the skilled local workforce. As a client you want to work with an agency who understands the job and recruitment market in Zambia being able to provide insight into your expansion and needs. We have an extensive referral network and have built up trusted relationships and a highly reputable name in the Industry.


Why AdoGreen is so effective in working within Zambia, being able to target local candidates, is owing to extensive experience in pioneering within unfamiliar locations and successfully identifying the best recruitment practices for these type of environments for expanding and established companies. We put high value on client and candidate relationships.


Not sure who you are working with? Review our highly skilled team.


If you are a candidate and need more information about applying for jobs or CV writing Tips review our section under Candidates in the navigation bar. A good place to start is CV Writing Tips

Zambia, officially called the Republic of Zambia is a landlocked country in Southern Africa, Africa, and the 39th largest country in the world after Chile. The capital of Zambia is Lusaka. Population is mainly around Lusaka, and also the Copperbelt province. On 24 October 1964, Zambia declared independence from British colonial rule. Zambia was also named the world’s fastest economically reformed country in 2010. Interestingly the Common Market for Eastern and Southern Africa (COMESA) is headquartered in the capital Lusaka. It is no secret that the mining industry is the economic backbone of Zambia. Although Zambia is such a large producer of copper and cobalt in the world, 68% of the population live below the recognized poverty line.


Exploration of copper started as early as the 1930’s, but since then other commodities have been explored and mined. As a byproduct of the mining, and production of copper significant quantities of selenium, silver, gold and platinum are produced. Lead, and Zinc was found in the carbonate-hosted deposits in Kabwe, it ranks as one of the highest zink, and lead deposits in the world.

Copper prices dropped drastically in 2015 giving a bleak foresight for mining and producing of Copper in Zambia and the rest of Africa. Mopani Copper Mines is the second largest employer in Zambia after the government. The mine produces of 25% of the total metal output in Zambia. Zambia is facing some troublesome time as the copper makes out 70% of Zambia's export income.

Zambia has been plague by a severe drought this in turn brought the power generation capacity of the country to a low. Power cuts have been devastating for the mining sector affecting output severely.